FPGA deployment and scaling on distributed systems; the missing layer

FPGA deployment and scaling on distributed systems; the missing layer

FPGAs can offer significant speedups in many applications, but they lack frameworks for easy deployment and scaling. In the CPU-world, software community has moved from a single node deployment era to virtualized deployment era and most recently to multi-tenant, multi-server deployment using Kubernetes. In this article we discuss how the corresponding framework in the FPGA-world can make much easier the deployment, scaling and resource management of FPGA clusters in distributed systems.

Virtualized deployment era: As a solution, virtualization was introduced. It allows you to run multiple Virtual Machines (VMs) on a single physical server’s CPU. Virtualization allows applications to be isolated between VMs and provides a level of security as the information of one application cannot be freely accessed by another application.

Virtualization allows better utilization of resources in a physical server and allows better scalability because an application can be added or updated easily, reduces hardware costs, and much more. With virtualization you can present a set of physical resources as a cluster of disposable virtual machines.

Each VM is a full machine running all the components, including its own operating system, on top of the virtualized hardware.

Container deployment era: Containers are similar to VMs, but they have relaxed isolation properties to share the Operating System (OS) among the applications. Therefore, containers are considered lightweight. Similar to a VM, a container has its own filesystem, CPU, memory, process space, and more. As they are decoupled from the underlying infrastructure, they are portable across clouds and OS distributions.

Containers have become popular because they provide extra benefits, such as:

Containers are a good way to bundle and run your applications. In a production environment, you need to manage the containers that run the applications and ensure that there is no downtime. This is way many companies are now using Kubernetes for the scaling and docker deployment. Kubernetes provides you with a framework to run distributed systems resiliently. It takes care of scaling and failover for your application, and provides instant deployment and easy resource management. 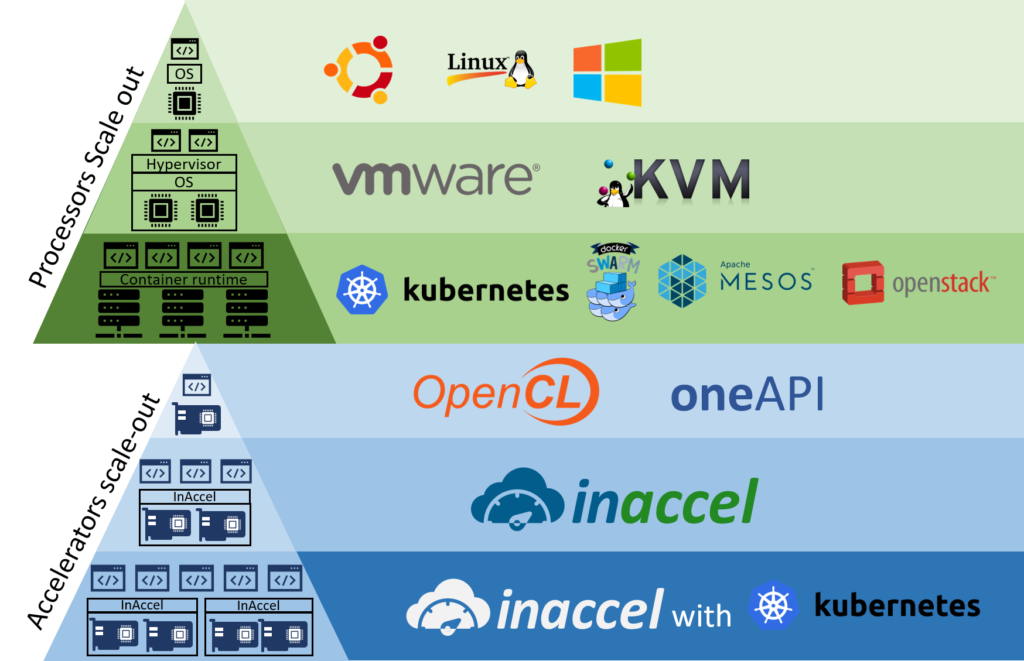 The need of Powerful Accelerators

However as typical processors can no longer keep increasing their performance as in the past due to the end of Moore’s law and Dennard’s law, most efficient computing elements have to be utilized. Especially in application like Machine learning where the computing power that is required keeps increasing every 4-5 months, high-performance computing platforms are required.

According to John Hennessy and David Patterson, the only path left for higher performance computing systems is domain-specific accelerators: Digital circuits that have been developed for specific tasks providing 10x-200x speedup compared to CPUs and consume much lower energy.

FPGAs (or Adaptive Compute Acceleration Platform – ACAPs) are programmable domain specific accelerators that can offer both the performance of tailored-made architectures and high flexibility. FPGAs can be configured for specific tasks offering higher performance than CPUs and are programmable meaning that they can be programmed with different kind of accelerators (IP blocks) depending on the application requirements.

FPGAs offer significant advantages compared with other computing platform like increase performance, lower latency and better energy efficiency. However, the widespread adoption by the software community requires the availability of frameworks that allow easy deployment. The required frameworks are necessary that will allow software developers to deploy FPGAs in the same way as any computing platform.

Cloud providers offer only FPGAs as infrastructure making hard for the software community to easily deploy their applications. For example, in case that the application needs to be deployed in 8 FPGAs, software developers will have to manually distribute the workload to the available FPGAs. Similarly, if multiple users or applications wants to have access to a cluster of FPGAs, software developers will have to develop their own solution to prevent the conflict of the resources or the serialization of the access to the FPGA resources.

Having in mind these issues, InAccel developed world-first FPGA orchestrator that allows easy deployment, instant scaling and seamless resource management of the FPGA clusters. InAccel’s FPGA orchestrator allows the deployment of FPGAs as a Platform ready to be used by the software developers just like any other computing system.

InAccel FPGA orchestrator abstracts away the available FPGA resources serving as an OS layer and “kubernetes-alike” layer for the applications that need to be deployed on FPGAs. The main advantages that InAccel’s orchestrator offers are:

InAccel’s unique approach of an FPGA orchestrator as a middleware, allows the easy deployment of FPGAs by software developers. An FPGA orchestrator is used to schedule the function callings to the available FPGA resources. That methodology allows easy scale-out of an application to multiple FPGAs in the same server without the user having to manually define which function will be executed on which FPGA. As it is done in the software world where the users do not specify in which core the application will be executed, similarly InAccel manager/orchestrator automatically dispatch the functions to the available resources in the FPGA cluster.

Also, it automatically configures and initialize the FPGAs with the right bitstream making easier than ever the deployment of FPGA clusters from a software developer. Actually, it serves like a Kubernetes for multiple FPGAs n the same servers. Combining the FPGA manager with InAccel’s Kubernetes plug-in it allows to scale-out also to multiple servers with multiple FPGAs making it ready for enterprise-grade deployment.

FPGA offer a unique combination of advantages: high-throughput, low latency and energy efficiency. Using OpenCL and C/C++ is now easier than ever to create your own accelerator. However, in order to allow the widespread adoption of FPGAs, we must offer the frameworks that will allow easy deployment in the same way that is done in computing resources like CPUs and GPUs. InAccel’s unique FPGA orchestrator provides the abstraction layer that servers as an OS for an FPGA cluster and allows easy deployment, instant scaling and seamless resource management for easier integration with the software stack.