How to reduce data center’s OpEx during the energy crisis

In the last few months, the energy cost has increased significantly especially in some European countries. In Germany for example, the energy cost in June 2021 was almost 50 euro/MWh and in September of 2022 has skyrocketed to 315 euro/MWh (that is almost 6x fold increase). The increased energy cost has a huge effect on the data center’s cost of operation (TCO) for many companies. The TCO in data centers depends almost entirely on the electricity cost and rise of this cost affect significantly the cost of operations.

To face this new challenge a paradigm shift is required to more energy efficient computing platforms. FPGAs for example are configurable processing platforms that can be customized to perform a single task but extremely fast. The main benefit of FPGAs is that since they are configured to perform a single task, are more energy efficient compared to CPUs of GPUs.

In this article we present a simple example on how FPGAs can come to the rescue in data centers during this energy crisis. In this case, we examine a 42U rack in a data center that accommodates 14 servers (assuming each server is 3U). Assuming that the average power consumption of a server is 1000W, this translates to 8760kWh per year. With $0.1/kWh this translates to a cost of $876 annually.

If your application needs to be deployed on all the 14 servers the over cost will be $12,264 annually. However, with $0.3/kWh this increase to almost $37k.

FPGAs can provide around 10x-20x speedup compared to a multi-core processor. Assuming that for the specific application the FPGA can provide 7x speedup that means that 14 servers can be replaced by a single server with 2 FPGAs cards (each providing 7x speedup).

The power consumption of a typical FPGA card is around 200 Watt (i.e. 215 W for the powerful intel D5005 card). This means that the server with 2 FPGA will now consume 8760W for the CPUs annually and an additional 1752 x 2 Watt per year for the FPGAs.

As it is shown, in the old world the migration to an FPGA-based server would be cost efficient when your application is deployed on more than 8 servers. However, in the energy crisis world, assuming $4/kWh, it makes sense to migrate to an FPGA world only after your applications needs to be deployed on more than 3 servers. And as the number of required servers is increased the cost saving will be even higher using an FPGA-based configuration. 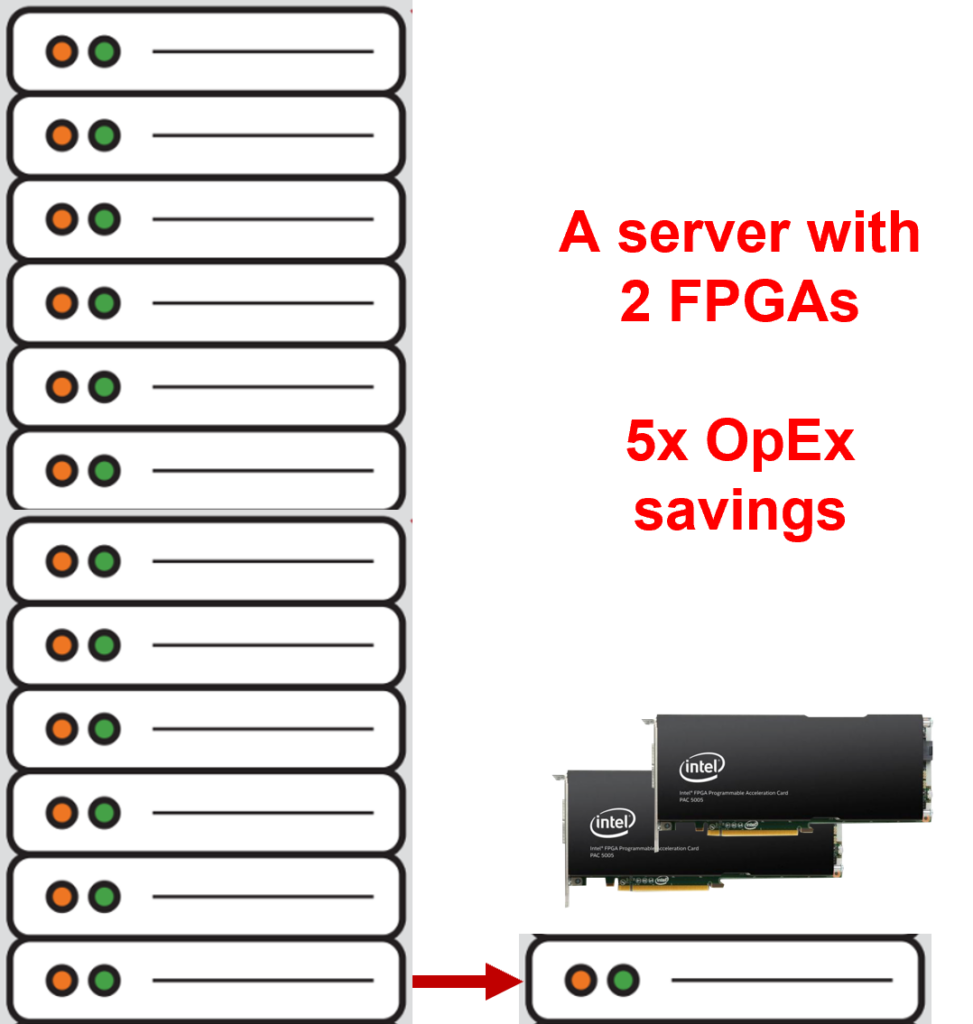 Of course, FPGA deployment used to be not so easy in the past. This is exactly the reason that we developed the InAccel FPGA resource manager that allows easy deployment, scaling and management of FPGA clusters. You can find more information at http://inaccel.com