According to professor emeritus of the University of California, Berkeley, David A. Patterson, the only path left to keep increasing the performance and the energy efficiency of computing systems is through domain-specific architectures. FPGAs have been widely used in the embedded system world to provide domain-specific architectures especially in the domain of network and communications systems. FPGAs can offer high performance (e.g. 20x speedup compared to multi-core CPUs), flexibility (through the reconfiguration as opposed to AISCs/ASSP) and high energy efficiency compared to CPUs and GPUs.

One of the main barriers for the widespread deployment was the high programming complexity. The domain specific accelerators had to be written in hardware description languages like VHDL and Verilog making the process of mapping software functions to hardware a rather difficult task affecting negatively the utilization of FPGAs. Over the last few years, however, it became easier to develop specialized architecture from high-level languages. FPGA vendors like Xilinx and Intel offer now new EDA tools that allow developers to create specialized architectures using OpenCL or C/C++ (HLS). This step makes much easier the development of specialized accelerators. FPGAs can now be used in several applications like machine learning, quantitative finance, image processing, data analytics, databases and in general as an accelerator for the most-computationally intensive tasks.

The second barrier for the widespread adoption in the data center and HPC world was the lack of an efficient framework for the easy integration, management, deployment and scaling of the FPGA resources. Currently most of the provided frameworks require the user to explicitly instantiate and invoke any FPGA resources using the OpenCL API, meaning that a user should care about the underlying hardware structure, the connectivity of the resources (for example in which memory banks is an FPGA kernel connected to) etc. Moreover, using the current toolbox it is not easy to scale one application to multiple FPGAs or multiple kernels. Similarly, it is not easy at all to have multiple users/applications/processes to utilize one or more FPGAs. On the other hand, one of the main reasons that led to the wide adoption of cloud computing is the broad availability of frameworks that allow for easy management, deployment, scaling and virtualization of the computing resources.  Towards this end, InAccel developed a unique framework that enables the orchestration of the FPGA acceleration tasks making the utilization of every FPGA cluster as easy as it is in the software world.

The following figure depicts how InAccel Coral FPGA resource manager allows the easy deployment and the seamless sharing of the FPGA resources. 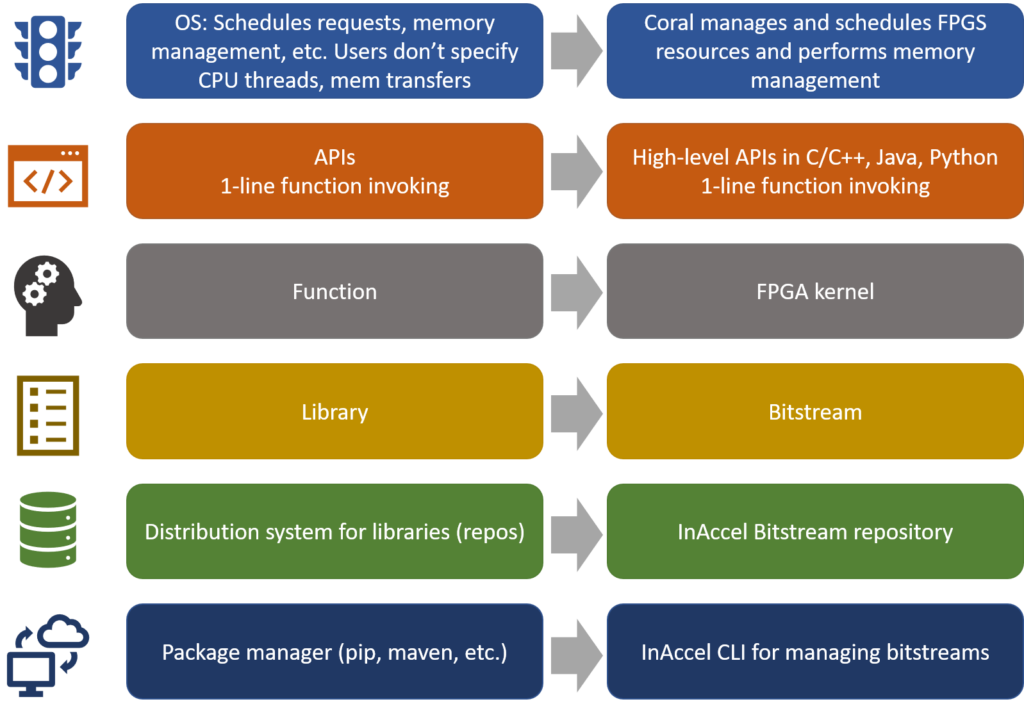