FPGAs have been emerged as a high-performance computing platform that can meet the demanding AI requirements in terms of throughput, latency and energy-efficiency. FPGA vendors like Xilinx, Intel and Achronix have developed great FPGA platforms for data center and edge applications.

However a main challenge on the domain of AI/ML is the easy of deployment. Data Scientists and ML engineers care not only for high performance and fast execution but also for easy of deployment at scale. Deploying trained neural networks in applications and services can be very challenging for infrastructure managers.

InAccel provides a unique FPGA cluster manager that allows easy of deployment and scaling at production level for AI and ML applications. The FPGA manager can be used both for inference and training of ML models. Currently, it is fairly easy to offload a task on a single FPGAs. But what happens when multiple users want to deploy their applications on a cluster of FPGAs? Currently, sys admins had to manually allocate FPGAs to users resulting on low overall utilization.

InAccel has developed a unique technology that allows easy scaling and resource management of FPGAs at production level. InAccel Coral cluster resource manager performs the serialization and the dispatching of the ML tasks on the FPGA cluster automatically.

That means that users can just invoke the functions that they want to speedup without explicitly specifying in which FPGA it will be deployed and the memory transfers. The users just have to select on how many FPGAs their application will be deployed and the Coral cluster manager automatically dispatches the tasks to the available FPGA resources. That means that users can enjoy higher FPGA utilization and the faster execution of their applications. It also means easier deployment as the software developers do not need to manually dispatch the tasks to the available FPGAs. Also through the unique InAccel bitstream repository, software developers do not need any more to specify the name of the bitstream in the host code and the memory transfer making much easier the development and the invoking of the FPGAs. 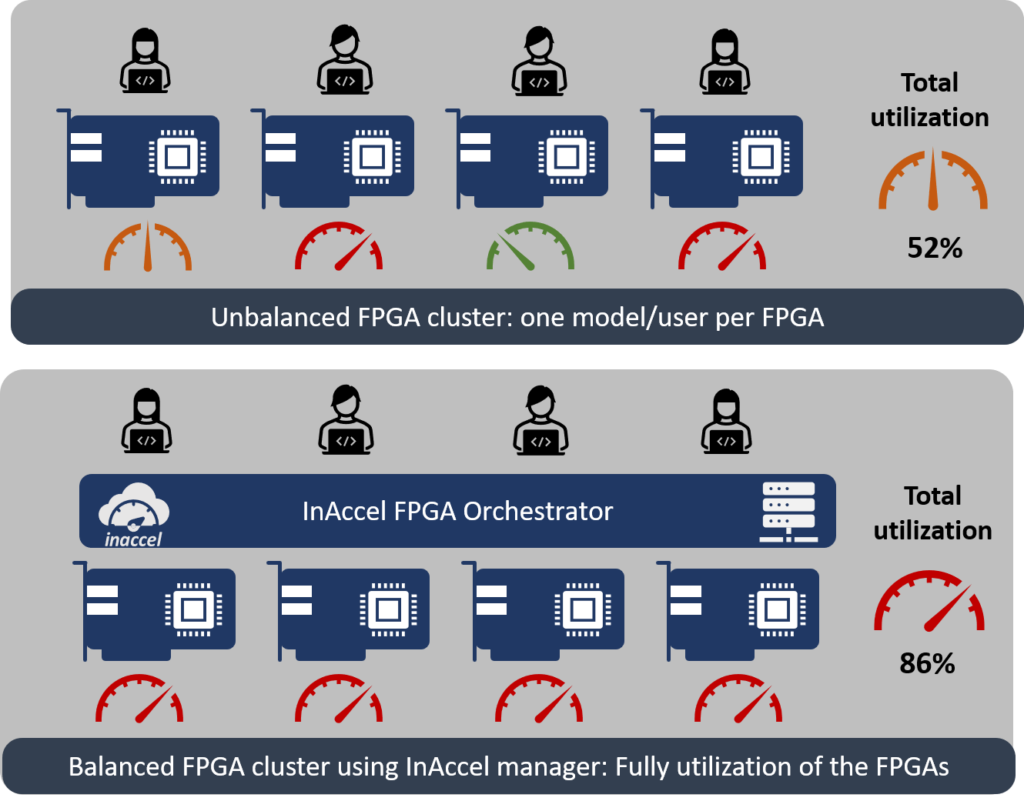 Evaluate for free the InAccel cluster manager for your applications at https://inaccel.com