The need of an Accelerator Operating System

The need of an Accelerator Operating System

In the early 2000s, each mobile vendor had it’s own operating system (OS). Symbian was used for the Nokia phones, Blackberry had it’s own OS, and Palm had also it’s own OS. As the market was quite fragmented, Android Inc. was founded in Palo Alto, California, in October 2003 by Andy Rubin, Rich Miner, Nick Sears, and Chris White. Rubin described the Android project as 'tremendous potential in developing smarter mobile devices”. In July 2005, Google understood the important of a vendor agnostic OS for mobile phone and acquired Android Inc. for at least $50 million.

In the early 2000s, VMware introduced the world to virtual servers that allowed IT to make more efficient use of idle server capacity. Virtualization is the process of creating a software-based, or virtual, representation of something, such as virtual applications, servers, storage and networks. It is the single most effective way to reduce IT expenses while boosting efficiency and agility for all size businesses. Virtualization allows to run multiple operating systems on one physical machine. It also allows to divide system resources between virtual machines. It also provides Provide fault and security isolation at the hardware level and helps reduce the OpEx in data centers.

Now it seems that time has come for the acceleration cards and specifically for FPGAs. In the last years, more and more cloud vendors have started providing FPGAs as an alternative instances that can provide major advantages like high-throughput, low-latency, deterministic execution time and energy-efficiency that is translated to OpEx reduction.

FPGAs can offer significant speedups in many applications, but they lack frameworks for easy deployment and scaling. In the CPU-world, software community has moved from a single node deployment era to virtualized deployment era and most recently to multi-tenant, multi-server deployment using Kubernetes.

In the past programming FPGAs was challenging, but now software programmers can develop their own accelerators written in OpenCL or HLS C/C++. However, still the easy deployment remains a challenge as programmers need to be familiar with the FPGA programming paradigm and there is a lack of an abstraction layer that will allow easy and automated deployment, resource management and scaling.

InAccel FPGA orchestrator abstracts away the available FPGA resources serving as an OS layer and “kubernetes-alike” layer for the applications that need to be deployed on FPGAs. The main advantages that InAccel’s orchestrator offers are:

InAccel’s unique approach of an FPGA orchestrator as a middleware, allows the easy deployment of FPGAs by software developers. An FPGA orchestrator is used to schedule the function callings to the available FPGA resources. That methodology allows easy scale-out of an application to multiple FPGAs in the same server without the user having to manually define which function will be executed on which FPGA. As it is done in the software world where the users do not specify in which core the application will be executed, similarly InAccel manager/orchestrator automatically dispatch the functions to the available resources in the FPGA cluster. 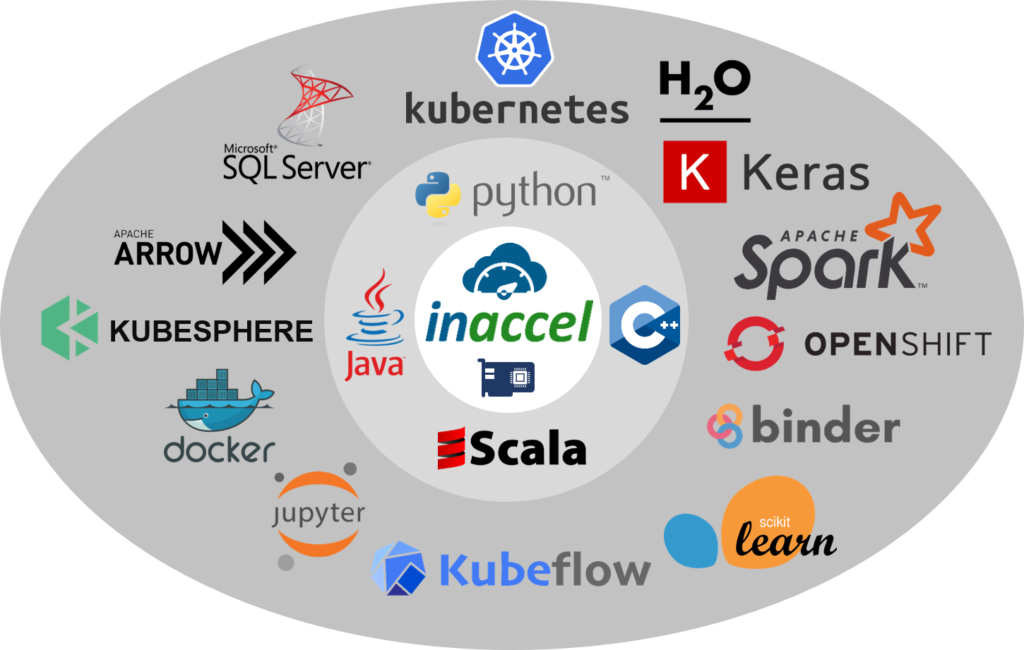 Also, it automatically configures and initialize the FPGAs with the right bitstream making easier than ever the deployment of FPGA clusters from a software developer. Actually, it serves like a Kubernetes for multiple FPGAs n the same servers. Combining the FPGA manager with InAccel’s Kubernetes plug-in it allows to scale-out also to multiple servers with multiple FPGAs making it ready for enterprise-grade deployment.

Actually, it makes it so easy to utilize the power of FPGAs, that anybody can try it now for free from their browser using Jupyter notebooks. More info at https://inaccel.com/

FPGA offer a unique combination of advantages: high-throughput, low latency and energy efficiency. Using OpenCL and C/C++ is now easier than ever to create your own accelerator. However, in order to allow the widespread adoption of FPGAs, we must offer the frameworks that will allow easy deployment in the same way that is done in computing resources like CPUs and GPUs. InAccel’s unique FPGA orchestrator provides the abstraction layer that servers as an OS for an FPGA cluster and allows easy deployment, instant scaling and seamless resource management for easier integration with the software stack.